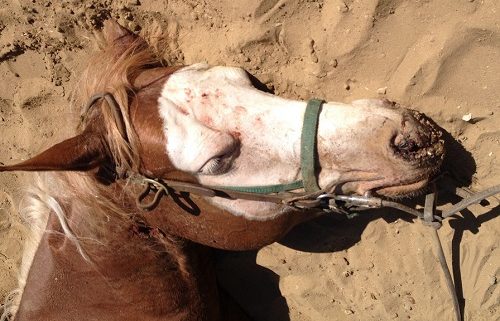 Deputy District Attorney Vanessa Gerard, of the San Diego County District Attorney’s Office, was present at the San Diego Superior Court, South County Division for sentencing. According to Gerard, approximately 12 “Bella” supporters were in attendance, two of which stood up and read letters to the court. Arballo also read a letter in which he maintained that Bella’s death was an accident.

Bella Gunnabe Gifted (Colonels Smoking Gun [Gunner] x Bay Brim Hat x Hollywood Return) died at age 5 while in training with Arballo at owner Martha Torkington’s River Valley Ranch. Following an investigation by the County of San Diego Department of Animal Services, the district attorney charged Arballo with one count of felony animal cruelty under California Penal Code 597(a) in September 2014. He pled not guilty in October, but in late March, entered a plea of guilty to one charge of felony animal cruelty under PC597(b).

“There was the 597(a), and that essentially included the element of intent – that he intentionally tormented a horse. And 597(b) takes out the element of intent. So it just says that he did torment a horse,” Gerard explained. “It’s kind of a technical difference, but he [Arballo] didn’t want to plead to the intentional. For our purposes, it was still a felony. He admitted to tormenting the horse and torturing the horse and he got the same amount of time, so we were OK with him pleading to that.”

Arballo will be monitored in San Diego through a SCRAM house arrest GPS monitoring device. He is only allowed to leave his residence for work, church or medical reasons. The sentence also included a Fourth waiver as a condition of probation, meaning that Arballo’s person, house or effects can be searched at any time without probable cause.

“He’s also not to train horses as a condition of probation,” said Gerard, adding that the issue of horse ownership represented a gray area. “We do know that he owns a horse. He [the judge] basically made it clear that he [Arballo] was not to be training or around horses, but the actual issue of him owning a horse wasn’t specifically addressed.”

While the normal court fees were imposed, Gerard said the issue of restitution was not brought before the court. “Mrs. Torkington said that she had already been made whole from the insurance payout, so we didn’t address it.” Torkington has filed a civil case against Arballo and his girlfriend, Patricia Hohl, that is still pending in the Superior Court of California, County of San Diego – Central Division. A tentative civil jury trial date of Jan. 29, 2016 has been set.

The National Reining Horse Association (NRHA) handbook addresses court of law convictions and allows the NRHA to discipline a member if there is a conviction of an individual felony, animal abuse or moral turpitude under municipal, county, state or federal law. According to the NRHA publication The Reiner, Arballo’s NRHA membership is currently suspended. The American Quarter Horse Association (AQHA) previously sent notice to Arballo, who was not an AQHA member at the time, that the association had imposed restrictions on him, including the denial of privileges associated with conducting registration-related transactions with the AQHA and participation in any AQHA event.

“It was a newer case to our office, and I think it was something that was very close to the horse community’s heart,” Gerard said. “We did get a lot of media attention from the equine community and from what I’ve understood, they were very pleased with the outcome that he was not able to train horses. And that was ultimately our goal as well. We wanted to make sure that, for at least the three years that we could, he was not going to be near another horse.”

Mark Arballo is paying a price now for his actions and it will set a precedent for all other trainers facing action against them for horse abuse.

NOTE:  It is reported that Mark Arballo is now back as a NRHA Reining Horse Professional Trainer.