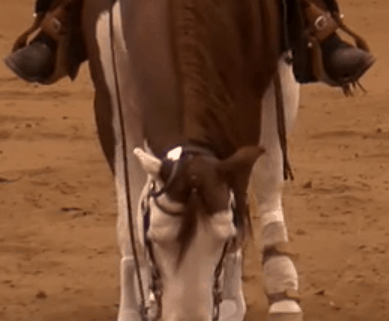 Intimidation or Not? You be the judge of these two videos. A horse dropping its head to the ground at every stop? A shake of the reins and the horse is eating dirt. To perform the next manouevre, the horse must lift his head at least 2 feet higher so why have its head all the way down there?

At a recent judge’s seminar one of our team attended, judges and applicants were advised not to give credit to horses that dropped their heads to the ground as it showed intimidation. The lead judge’s instructor was saying ‘a horse carrying its head unnaturally low, dropping its head lower with every shake of the rein – is not the look we want for reiners. They look intimidated and probably are.’

You be the judge of poor Titan the deaf horse owned by the outspoken Clinton Anderson. The horse he likes because he is a dumb horse.

What is intimidation training?

Intimidation training, which is repeated punishment, is the primary way most horse trainers get their horses to perform. They jerk, jerk, jerk on the reins or spur, spur, spur until the horse complies out of fear and force. Of course, a horse that is deaf is already at a set back of submission; basically, the animal is disabled and categorized that way if he were a human.

This method works for those who demand short-term results; just long enough to win a class.

Intimidation is teaching a horse helplessness. A horse drops its head to the ground when it’s being dominated in the wild and when being ridden. Reiners want their horses helpless and entirely reliant on them for every move. Another good reason to have a deaf and dumb horse some might say.

Intimidation training works so well that a great many of the most successful trainers seldom use any other form of behavior modification. It becomes the ‘way of training’ as the majority of professionals use intimidation, and the majority of horse owners who are not professionals adopt the same methods of “intimidation” as their training practice to get a horse to perform. Stand in the warm-up pen, and the fact cannot be denied unless your drowning in their Kool-Aid. It’s Monkey see-Monkey do.

With most of the judges and “influencers” of reining policy also being trainers or are “invested” in the showing of reining horses, intimation is accepted. No one will stand aside and enforce fair change for the horses as it could mean the end of an industry with so many operating with intimidation. Instead, the policy makers concern is increasing the revenue and prize money to feed the intimidation trainers and those invested in the industry.

The proof is that intimidation trainers are continually intimidating their horses. You can observe it during at-home training sessions, during the warm-up at shows, just before entering the show pen for a performance class and even after exiting the show pen. They even post videos of it now as the standard practice for training a horse.

When a person wins in the ring, Money see-Monkey do goes into overdrive. How many horses now will be victimized to drop their heads to the ground when at a standstill?

It’s never-ending because it is never permanent. You often see a horse that performed in the pen, under new stewardship start to fall apart. Less intimidation is applied and the perceived training starts to unravel. Intimidation training does not teach a horse the correct response to a request that will be long-lasting; it only instils fear and helplessness. The horse merely performs out of an effort to avoid pain.

Intimidation trainers don’t use positive or negative reinforcers; they quickly opt to negative as the horse shows a sign of non-compliance. They immediately begin more intimidation—severe bits, tying heads up in stalls, refusing to let horses lie down to rest, excessive flexing without relief. Relief is not just letting the rein go, its letting the horse carry its head naturally for a period of time to relax all the muscles.

There are those unique horses that can tolerate the intimidation and can win classes…some even become champions. But, of course, most intimidated horses don’t perform well consistently. They get so nervous, and fearful, that they can’t manage a smooth and graceful performance; instead, they get through it with pinned ears, swishing tails (unless tail blocked), sweaty necks, and heads carried as low as their knees or lower.

Judges aren’t going to disqualify professional horsemen since they feed the NRHA money machine. They may have to show under them also at a later date. They are not going to score them down due to the fear of retribution when they are being scored. The judge’s seminar is seemingly an ideological session that no one is forced to comply with.

NRHA Directors and Show management are the only people who can set aside those who succeed using intimidation training. Disciplining the worst to set a standard for all others.

It is just plain stupid to think competitors are going to discipline themselves or their trainers….why would they? The consequences are intimidating!