A quick video looking at how reining horses are trained by one of the million-dollar cowboy featuring in the film ”The Last Cowboy” and “Run for a Million” competition.

This is the event that is being promoted as the greatest exposure of reining in its history by program writer and NRHA Hall of Fame Inductee, Taylor Sheridan. The Paramount Network distributing the film of The Last Cowboy. The Run For a Million Competition held in Las Vegas.  The reining horse also appeared in the hit series Yellowstone.

Watch the video and see how the horses are trained by what is written up as one of the NRHA’s best trainers.

In case you missed it here is a short video of his training method. Some people may have an issue with the spur gouges in that horse’s sides and marks left, but in reining its part of the training – this guy is the expert. Some may wonder about the jerking of the reins when the horse is already pinned against his chest – but that is reining training. Watch the tail – all that spurring and jerking and no wringing or clamping of the tail. Wonder how he achieved that?

Is the Paramount Network promoting cruelty to horses?? Is this like the old days of Hollywood where entertainment was more important than the journey of the horse – thinking back to the stopping and flipping of horses with the Running W – banned in the mid-1940s. 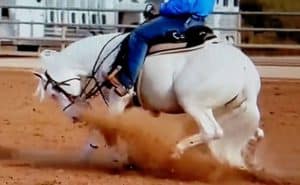 Do you think this breaches the AAEP Guidelines of Horse Abuse?

Remember to sign the petition to stop tail blocking