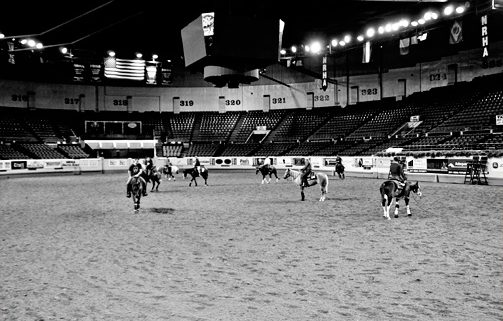 “I am no longer willing to do to the horses what it takes to run at 75+ at a reining futurity?’ breeders, owners and some respectable trainers are saying about horse abusers.

Breeders and Owners connected with some of the top horses in the country are sick of the abuse and are backing away and some are even leaving the sport forever.

The wannabes and “excusestrians” are still justify ‘what it takes’ saying the horses are the most cared for horses in the world. So what are the people talking about when they say ‘what it takes to train a horse to run a 75?

As you sit back cheering and applauding horses at the NRHA Futurity, or any other major event, think of the horse’s life and experience before the Hollywood lights were turned on and the few moments in time define the public view of reining – big slides and fast spins. A trainer has a split second to define their place in the reining sport history, and the horse will make or break them.

For that reason, the futurities bring out the worst in people, and the NRHA is an association that has built nearly its entire existence around it. For reiners, it is the basis of every conversation, every breeding program, every trainer’s waking moment – competing in the futurity and winning. Doing whatever it takes to win.

The futurity is the event that takes winners to a perceived level of godliness to those within the sport. A right of passage that seemingly allows a person to do anything they want without question. A place where ego’s flourish and rule every decision. Ego is what the entire futurity and show system is about. It is like a drug that once sampled at the lowest of levels must be pursued at all costs to reach the top.

For the uninitiated, the rules are simple for the sport of reining. To rein a horse is not only to guide him but also to control his every movement. The best-reined horse should be wilfully guided or controlled with little or no apparent resistance and dictated to completely. Any movement on his own must be considered a lack of control. A lack of control is penalized by predetermined points, and they are out of the money.

So, you have an ego-driven dictator in control of a horse’s well-being. An ego that may take any action of the horse as disobedience that must be reprimanded immediately or as they say corrected immediately to stay in the money. The excusestrians have a field day with bizarre justifications of what is outright abuse, but then horse abuse is not their problem – they enable people to do it.

It would take a very mature person to manage the balance day-in-day-out to train these horses, and an ego would be the most dangerous tool to have.

Sitting on the fence 2am-4am in the morning during futurity week and you would be hard-pressed to find a mature person respecting the horse.

Winning all weighs on the horse. The horse, a simple creature that is rarely asked for his opinion or whether it is what he wants to do, is subjected to some of the most horrific things just to feed the futurity and show ego and win. The horse has no voice. Unfortunately, horses can take a lot of abuse before succumbing, and they are usually silent about it. The horse is ridden and trained to the point of helplessness. It must wait on the rider for every movement, its legs, head, and body and be in total submission and control.

To get the results, you will not see big name trainers back off nor their wannabee underlings; the horse, will perform no matter what. They have invested time into the training, and the horse has no excuse – it must do it. The longer the animal has survived in training, the less tolerance the trainer has for any level of disobedience or movement on its own. A misunderstanding of a command can lead to untold pain and suffering for the horse. Of course, the trainer never made a mistake it is always the horse that is wrong.

Mention that pain and suffering inflicted by a trainer and the wannabes and “excusestrians” will be lined up behind them, worshipping their winning ways and trying to be just like them. It is like spawning abusers. The excusestrains will ignore any sense of compassion and intelligence to be accepted in the inner circle of a trainer barn.

So what does it take to run a 75 at the futurity or major event?

For many horses, it means hours, weeks, and months of drilling maneuvers over a two-year period. The expression Drilled Numb sums it up. Drilling that is based on a desire for complete control and the horse to sacrifice its natural behavior and perform extreme and precise maneuvers on command every time. Living in a stable and working in the same pen, day in and day out for two years.

The horse that does not comply is faced with choices as the trainer, as much as some owners are determined to make the horse do it. The trainer is living off the horse, so they will not quit anytime soon.

As the training program continues, the tolerance of the trainer for incorrect steps or actions is reduced, and the pain and suffering increase through:

The list goes on, but that is enough for now. Now some or all of those things is a common journey to the flashing lights of Reining Hollywood where people believe its all roses and champagne for the horse.

The “excusestrians” say the horses are the best cared for in the world. They had shiny manes and tails and fed every day. Shiny coats and the trainer pats them at the end of a run showing how much they love the horse. The same thing a child abuser says about the children they abuse. 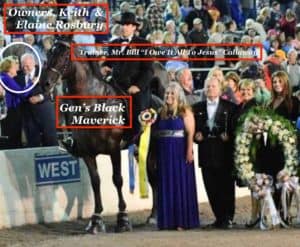 Let us share with you the comparative best of care in the world. TWH Gen has a shiny black coat and standing up tall. In this picture winning a major title, he has 8lb shoes on each front foot stacked high, weighted chains, sored legs (acid poured on his skin and into cuts), chains, tail blocked and tied high, horrific bit – Yep – that is love and care. The enabling abusers are standing by his side.

Is reining becoming the new Big Lick Horse??? Some owners and breeders of L4 horses are very concerned.

What history is showing us is:

It is time for Hitler to be removed from the sport. Go to the Poll and Vote for Change– now closed and the improvement of the rules to protect these horses.