We sat and listened to a high profile NRHA judge & former western sport board member at a judging seminar states “only old women are really concerned about animal welfare”. Probably the most honest and discriminatory statement made when you see most abusers charged are men. But does it reflect the priorities of NRHA or just the opinion of a rambling old fool?

What we do know is there is no place on earth for that mentality toward any breed of horse (or animal). God help the horses.

Some high profile horse owners and breeders have also been battling hard to protect the horses, the AQHA 2015 Protect Them Coalition.

As one of the highest profile women in quarter horse, Carol Harris and Kathi Hansen lead a group of 20 women to change the welfare of the quarter horse.

This applies to any quarter horses in general and those horses that compete at shows. The NRHA is not excluded from being considered in these remarks.

“We who love Quarter Horses have allowed too many inhumane trainers to become judges who continually reward each other when they judge or show in our competitions.

These trainer/judges have been permitted by our Association to badly hurt our favorite sport by participating in conflicts of interest positions at our Quarter Horse shows and by refusing to listen to valuable advice and criticism that have been given to them for years.

If our leadership and our members do not know the difference between right and wrong, they should try to remember that there is “NO RIGHT WAY TO DO ALL THE WRONG THINGS THEY ARE DOING”. That is exactly what they have been continuing to force on our horses, our membership and our Association for countless years. They never seem to think it is necessary to improve or correct the continual mistakes.”

Carol Haris of AQHA 2015 Protect Them Coalition writes: This email was sent to me a couple days ago by two Quarter Horse lovers, Betty Marshall and Liz Hickling. For some reason, it made me ashamed that I was not helping them like I used to try to, but a year and a half ago I was more or less asked not to write any more “On The Fence” articles because it disturbed the halter horse people too much. No telling who I will disturb this time, but the fact that people who don’t know the difference between right and wrong are still bothering me and should be bothering others the same way. 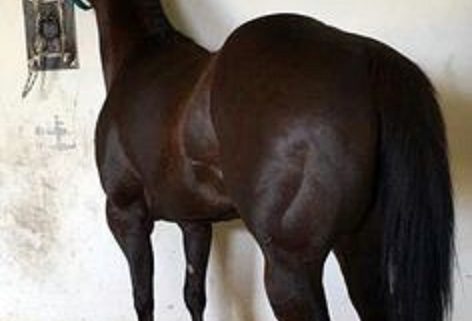 Professional Reining Horse trainer takes action against the NRHA after being suspended for abuse.

This is a story that just keeps on giving. It starts as horse abuse protests and allegations, owners pulling horses and end up with the trainer saying he is unfairly treated and should be compensated. What about the horse Mr Reining Trainer should he be compensated for being in your barn?

It all starts with this:

Imagine seeing your horse in a stall at a reining show. At first, it may seem normal and then you realize, your horse breaks out in a sweat and becomes distressed after being hung high for punishment for hours. Is this unusual for reining training?

The world is abuzz with the story of a reining horse who suffered the torturous treatment of being hung, while at NRBC  (National Reining Breeders Classic) annual show in April 2017. One of the largest shows on the NRHA circuit.

To assist you to understand how it can all turn out for the horse, the image below is a recent snap taken at western trainer C. T. Bryant’s barn displaying what a horse can suffer when it gets hung and loses its footing after attempting to get free. Now back to the reining professional busted. 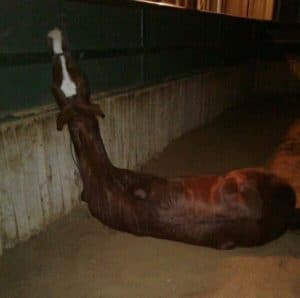 The sound of a thrashing horse could be heard across the facility. The thrashing noise was unbearable to listen to and many thought at first it was a cast horse. People talk about seeing others racing to where all the sound was coming from, ending up at a stall covered in curtains blocking any view inside. The curtains were pulled aside, and there is a horse that has been tied high now in deep distress and potentially could permanently harm or kill itself trying to get loose.

The allegations are the colt was hung by a Top 20 NRHA Professional trainer, but no one wants to speak of his name as he is one of the worshipped Top 20. It’s all hush hush unless you are in the inner circle, until now after his name has been finally published.

Reining trainers, like some others, are renowned for tying horses with their head and neck up to an awkward level; leaving the horse to appear to be on its tiptoes. A mindless method used by many reining trainers to punish horses in an attempt to tame those that show any sign of resistance to their dominant training regimes that demand the control of every move the horse makes. Some horses are tied like this, away from food and water, all night. In severe cases, the horses will be left like this for 23+ hours. Some hang them on high walls, others from rafters in stalls and arenas. It is the secret that no-one in the inner circle talks about.

The suffering horses pull against the restraint, half-rearing and shuffling their feet, trying to ease their pain and suffering. The muscle cramps and tearing of muscles and ligaments are relentless on them. All the horse wants to do is drop its head down to relax the muscles. These horses are bred to have a low head carriage hung well outside their bearable comfort zone even for a few minutes.

Attempting to escape, the horse can lose its footing and then they are in serious trouble. Others just quit and submit to the helplessness in agony and silent distress. To move around can mean breaking their neck, others kill themselves with a severe hit to the poll while reefing on the tie-up. They can break legs, and hips and even smash teeth with the halter pulled through their mouth.

Some clandestine trainers and their bamboozled owners call it a necessary part of training. Most enlightened people call it abuse. The horse would call it hell.

Unlike the horse in the photo, not all horses reached the point of complete exhaustion and hang themselves, but many suffer severe muscle pain and muscle tearing and are expected to work as performance horses the next day. The trainer is believing they have dominated the horse sufficiently that it will do what is demanded of it instantly to avoid another tie-up session or further pain inflicted.

Most trainers using this technique also have a bag full of other torturous methods they apply to dominate the horse to the point of learned helplessness. Submissive and robotic fulfilling the trainers’ aim for a winning ride.

This clandestine trainer thinking occurs when the desire to win–or otherwise achieve training goals, overcomes the humane treatment of the horse. When they run out of intelligence and patience and their repressed anger takes over. The trainers in some cases resent the horse will not do as it is told and become aggressive toward the animal. As the futurity season is well underway, horses are exposed to bizarre and oppressive training practices to force the final performance in the hope of winning.

The horse’s owner has pulled all her horses from the Top 20 NRHA Professional barn and moved them to other locations. It is unknown if a protest has been filed as the NRHA lives in a world of secrecy when it comes to complaints and how they are handled.

What has the NRHA done about the incident and what standard did they set?  What did the stewards on the day do about this incident?

It has been a long wait. On a review of the disciplinary list for May 2017 through August 2017, the reining professional busted has not been mentioned. The September list was not published even though referenced in the index. However, the NRHA is renowned for not releasing all suspensions and revoked memberships. It often seems that just the occasional one makes it to the list; the ones that they cannot keep undercover.

Update: In the October 2017 disciplinary list, an alleged trainer, Arno Honstetter is finally published with just a minor three-month suspension. Did they charge him for hanging a horse or was this for another offense, as it has taken so long to appear on the list?

Well, the lawsuit that follows shows us that Honstetter is actually reported for another incident in January 2017 by Leading AQHA Horsewoman and NRHA Trainer, Karen McCuistion. A person who is competent in defining abuse of horses. It is alleged that he was caught bitting up/checking a horse in the barn at a show. The same practice that killed Bella Gunnabe Gifted at the hands of Mark Arballo – who was banned for life, only after the courts found him guilty of abuse. Read the full article here.

Honstetter denies the abuse and believes he did not get a fair process in how the NRHA handled the protest so he wants it overturned and a payment of $100,000 for his suffering. If only the reining horses could get as good a legal representation as trainers!

No longer is the matter about horse abuse – its all about the trainer being treated unfairly – the culture of reining shining through.

Arno Honstetter continues to market himself as a NRHA Professional which again questions the value of the NRHA Professional program. His lawyer has advised that Biting up horses is a standard practice in NRHA – so all reiners are being abused?

The National Cutting Horse Association (NCHA) has a zero-tolerance policy on horse abuse, and recently immediately (within days) suspended a well-known high profile trainer for abuse of a horse at a show, even though the SPCA laid no charges. AQHA is reported to have a life ban on bitting up horses.