Tail blocking is pervasive in reining events and members believe it is a necessity to win prize money.

There seems to be a “cheat to win” mentality that has become pervasive in the show horse industry1. Tail blocking is unethical for veterinarians and shows the decay in training programs when it becomes a necessity to get a horse shown.

It is a cosmetic procedure for the “show look” being used to disguise heavy spurring and sour minded horses. It can also disguise soreness in horses for some ailments.

Tail Blocking is painful for the horse when being done, and they suffer for months following. It must be outlawed.

Tail Blocking is disrespectful and abusive to the horse, and it is only done for the trainers and owners financial gain.

According to DR KATE HEPWORTH-WARREN, DVM, DACVIM – the Quiet Tail is “perhaps the most dangerous tail alteration procedure, which the AVMA defines as “numbing the tail to cause it to hang limply.” This practice is most often performed on horses competing in Western disciplines, such as pleasure or reining classes, where horses are penalized for wringing, raising or moving the tail side to side excessively. “

Read the Full Article from Kate Hepworth Warren on Tail Blocking and its effects on horses.

According to the American Association of Equine Practitioners: 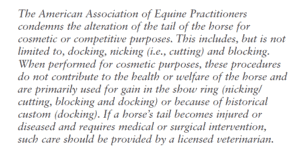 Hepworth-Warren says “Because tail blocking is considered inhumane and unethical, it is not taught in veterinary schools. Thus, any individual who performs the procedure most likely has had no veterinary training and may have minimal knowledge of the anatomy and function of the tail. If it is performed by a veterinarian, it is unethical.”

It is a cosmetic procedure and if performed is done so for financial gain only by the veterinarian.

Click here to read the Veterinarian Board position on tail blocking.

Some veterinarians are cashing in on this condemned procedure.

These unscrupulous veterinarians need to be outed and penalized for doing the surgical procedure, whether shown as the procedure or not on the invoice. If they are the attending veterinarian to the training facility or property, they must be reviewed when a horse is tested positive for a block tail.

The Veterinarian Association has a duty of care to ban Tail Blocking with severe fines, if not barring where done excessively, veterinarians who conduct the unnecessary cosmetic procedure.

Associations soft handed approach toward tail blocking is seeing a rise to epidemic proportions. Often boards are run by trainers. They are compromised in their ability to enforce rules, with conflicts of interest between owning-showing-training horses and rule enforcement.

This is a serious welfare issue that needs independent testing. Testing is provided by a 3rd party to ensure fair play in the show ring and the welfare of the horses.

Independent testing is the only pathway as boards are remiss in their duties.

Penalties are applied by judges for tail movement that put trainers out of the winners circle or top placings.

Because a swishing tail is penalized in some horse show events, particularly reining classes, handlers sometimes resort to methods, commonly called “blocking” or “nerving” that numb the tail or block the sensation of the nerve endings so it cannot move. Because tail-swishing is often linked to poor training methods, improper use of spurs, or to the horse being “ring sour”, i.e. burned-out on competition.

What is means for the horse’s welfare?

The tail is part of the horse’s spine. It is used for balance as it performs various manoeuvres. It is also used to remove flies and other biting insects from its sides for comfort. Tails can tell when a horse is suffering anxiety, frustration or indicate potential illness. It is a signal used by mares to the advances of stallions and used in herd (two or more horses) communication.

Blocked tails hang lifelessly, rather than swaying slightly with the movement of the horse. The animal has no way of lifting its tail to defecate and therefore defecates into its tail. For mares, they pass urine into their tails and often have bacterial issues in their uterine as the urine leaks in. This can lead to permanent breeding issues. Some trainers tie the tail around with string to their neck to save the constant washing.

In some cases, the discomfort of the injection leads the horse to move stiffly in the hindquarters.

In worst cases, the tail is permanently damaged and in severe cases, infection spreads into the hindquarters and tails can fall off.

A horse with a blocked tail cannot be left to pasture. They require full-time care to clean them each time they pass manure. Without the care, they are subject to fly strike (maggots under their tail) and other bacterial infections.

Horses naturally position themselves to urinate and defecate in such a way that it does not fall/splash on their legs. The mental frustration of not being able to do that continually messes themselves is torturous.

Horses competing in NRHA reining events, particularly high prize money and title events like futurities are observed to have blocked tails, regularly. Watching the live stream of the recent futurity it was clear the problem is escalating. Members cited in 2018 up to 80%, if not more, of horses competing at the NRHA Futurity event in Oklahoma City, had altered tails.

The NRHA has a statement on blocked tails but there is no evidence of fines or suspensions being given.

As the NRHA is not effectively managing the rules, the matter is now for public input through petitions to veterinarian associations and lawmakers. This is an inditement on the sport and a sad state that those that should be protecting them have abandoned them. The members are fully aware of tail blocking and do nothing.

As some say, this is no different to the self-regulation applied to the Tennessee Walking Horses Big Lick, which is undeniable suffering for the horses.

Sign the petition On Change.org today to stop Tail Blocking by clicking on this link

1 – Dr. Messer is a Professor Emeritus of equine medicine and surgery at the University of Missouri College of Veterinary Medicine and a member of the AAEP’s Professional Conduct and Ethics Committee 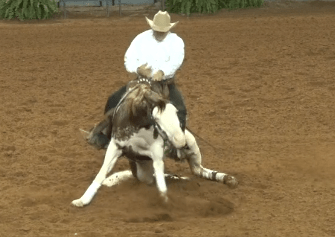 With the emphasis on rining extreme maneuvers in spinning and stopping  – are reining horses now being pushed beyond their limits? You read about the human subscription psychological drugs being administered to these horses, and the off label use of other unprescribed drugs, and cocktails. The contraptions were added to their equipment in order to enforce behaviors.

Where do all the training methods appear – in the show ring as they compete to win the big dollars – at all costs.

Be warned: some people may find this video of reining extreme maneuvers distressing to watch, and it’s just a sample of what goes on. Are they drugged? Tired? It sure is not normal – or is it?

WATCH THE ENTIRE VIDEO – 2.19 minutes
The horses in the video are ridden by top riders and million-dollar trainers. The last horse is interesting too.

Video of reining horses suffering from the extreme pressure applied by reining competitors. 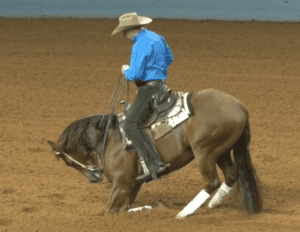 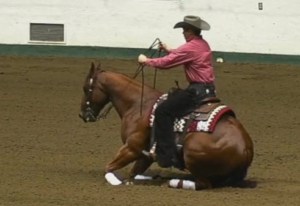 This may well have been a training video for NRHA judges and members to understand what the penalty is applied for by innuendo of its title, but it was published to the public.

Are the rule-makers creating an epidemic of this style of training and showing of reining extreme maneuvers?

Does it happen that often now they had to add a clause in the rule book – a 5 point penalty for that single run? Reining people have no issue with this reining extreme maneuvers – this is what showing reiners is all about. Just watch their comments on Facebook justifying that horses are not under extreme pressure.

A penalty score of 5 points is applied for this conduct. They may be out of the money on that run, but they are back in the next round pushing the horse to deliver the reining extreme maneuvers.

Is the NRHA living in the modern world where people don’t want to see horses suffering from extreme physical demands that show them suffering?

A well-managed association would be taking a more serious approach to rulemaking and the enforcement of rules. But maybe if the rules were enforced as members say ”there would be no-one left showing”.

Should collapsing on their knees be a suspension for six months and banned for it happening twice for over-riding or over-pushing the horse? Should it be an instant drug test? (These horses may not have been in the tiny sample of horses tested at the show that day. If they do test positive they usually get a smack on the hand. Trainers gamble their number will not come up. Reiners have the highest positive drug test results in FEI competition.)

Also, watch their tails and you can see which horses are using their tail to stop and those that lay flat-looking a lot like a tail block has been done.

If you care for the Welfare of Horses please vote on our poll now for change. Now Closed

Footnote: When Casey Deary’s horse went down he was applauded as a hero by the NRHA Marketing Machine as they moved quickly to respond to the claims of abuse. Deary himself releasing an NRHA PR styled response as the equine public reeled from what they saw. The horse was incapable of going on and questions are raised over potential drugging are yet to be answered. 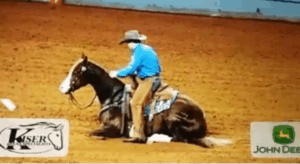