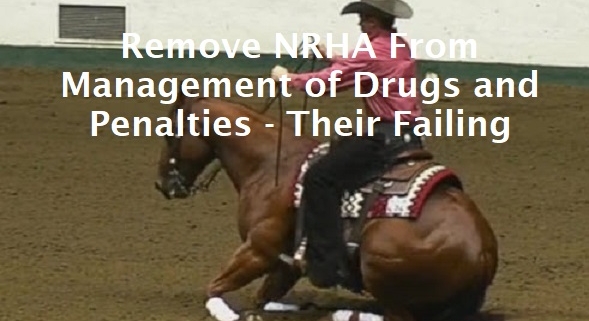 With an ongoing acknowledged poor record of performance by the Boards of Directors and Executive Committees placing horse’s welfare at risk and enabling an unfair competition landscape, immediate changes are required to who manages the drug rules and penalties.

The Final Straw: With the board of directors and executive committee (BoDEC) approving the continued off-label use of Sedivet on horses on the premise of tougher penalties, we look closer at what is really going on. The membership and public are outraged.

On close review of the rules and policies, it becomes very clear that most likely the new penalties will have little to no effect on those horses testing positive and will continue as business as usual. Read on to find out why that is the most likely outcome and the repercussion on the BoDEC.

Reining is an industry with many rumours constantly swirling around it for years, of excessive drugging of horses to win. The President has now openly confirmed that drugging has been a problem for years and remains a problem.

The President, Rick Clark, released an open letter to members attempting to explain their decision.

In a surprise admission, he stated, ‘we did not have the support to go to no allowance for Romifidine (Sedivet) at this time. It is as simple as that.” So Clark publicly admits horses are being sedated to be shown – so much for their mantra of willing guided.

Clark further admits, “If a horse tested positive, their name was never publicized, and they got to keep their title, purse money, and prizes. So they essentially got away with a slap on the wrist, and no one would know.”

On review of the rule books of the past few years, the option to take action was at all times available by the medications hearing committee, but Clark’s statement demonstrates they elected not to take action as set out in clause (0). E. Animal Welfare and Medications Provisions Applicable to all NRHA Events.

(o) The owner or owners of a horse found to contain a forbidden substance or any metabolite or analogue thereof may be required to forfeit all prize money, sweepstakes, added money and any trophies, ribbons and “points” won at said event by said horse and the same will be redistributed accordingly.

Further in the rule books, there are a number of clauses concerning the management of horses testing positive. The penalties are at the discretion of the medications hearing committee. Section 1I. 8 and E. Animal Welfare and Medications Provisions Applicable to all NRHA Events. (N) (O) (P)

(f) When a member is disciplined or sanctioned, the Hearing Body’s findings and determination will be presented to the Board and the Board may cause information regarding the discipline or sanction to be published on an appropriate disciplinary list.

Whether the penalty was $250 or $250,000 makes no difference, as the most fundamental step of publishing their name on the disciplinary list was not taken. Publishing positive drug tests for banned substances is often thought of as the greatest punishment, more than money and suspensions. Therefore, to be a known drug user to compete and have titles removed is a punishment and would be fair competition; an expectation of the membership.

The penalties are not the issue – the process of managing rule breaches and who is involved is the problem.

The Board of Directors and Executive Committee are ultimately remaining as the management of the welfare program. This same process has existed since 2015 and has failed the horses.

The fiduciary responsibility of any board, in summary, is:

The current and past BoDEC are responsible for protecting the horses’ welfare and providing a platform for fair and honest competition.

However, Clark’s letter of August 2022 has outlined that this was not the case, even in the light of hard evidence of positive drug tests. In providing his factual account and attempts to change rules he says “hopefully never find ourselves in such a dire situation again“.

Notably, Clark advises the changes will be taken in baby steps and provides no timeline for resolution for what is the most heinous experience for horses and matters of Animal Welfare in an equestrian association. This is unacceptable.

The members of NRHA, and the general public, expect more than they have experienced to date. Members are against drugs, particularly Sedivet, on mass by the commentary in private reining groups. Questions over the fees paid for drug testing and the validity of that spending are also high on the member’s agendas. It would be fair to say, the board does not represent the sentiment of a large proportion of the membership based on the online surveys in those groups

The thoroughbred industry battled with self-regulation for many years, and it is now law that HISA manage their medications and rulings. An independent body was created to ensure the welfare of horses and clean competition.

The NRHA cannot be trusted to manage the rules and penalties based on past performance, and the fact that 67%+ of the current board voted to retain an off-label drug for use by competitors raises alarm bells for many members and the broader public.

The members need to take action to change the rules or be seen as complicit in supporting what can only be described as a dirty sport.

Who Voted For a Drug Being Administered to NRHA Competing Horses?