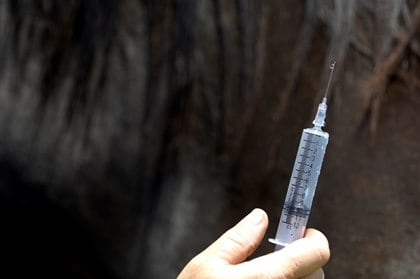 With a massive 94% of the weighting for welfare and medications clauses sitting squarely on medications, not abuse, in the National Reining Horse Association Handbook, the questions need to be asked: “Have you had your horse tested at an official NRHA event anywhere in the world?” and “How often are they testing at official events?”

The National Reining Horse Association has gone to great lengths in its handbook to define it’s Animal Welfare and Medications Rules and Regulations within their Handbook. As we mentioned in a recent article “NRHA turns back on horses again in 2017” the reference to welfare is weighted heavily to medications, not abuse.

In fact, there are:

That is a weighted ratio of just 6% emphasis on abuse and the balance on medications. Many would say that is just not good enough to manage and stop the abuse of horses that people write about observing in warm-up pens of NRHA shows across the globe.

Many questions can be asked about the medication rules.

The rule book states the testing can include physical examination, obtaining urine samples, blood testing or any other tests that an approved veterinarian considers necessary. All except the physical examination would have results post the horse competing in its classes. It raises the question does the horse still competes medicated or do they have an on-site rush service for testing?

Some of the prohibited drugs can take effect in a matter of minutes or within the hour before a person enters the ring. How is that tested? The horse is being warmed-up ready to show, a quick trip back to the stable and they are ready to go with it looking like it was just a quick slick up ready to show. Those that use medications would be swift and secretive in how they give them.

The test of whether the NRHA enforces the medication rules would be in the rulings. How often are people seeing someone’s placing withdrawn after an NRHA event as they were found to be in breach of the medication rules? Do they discipline the person but the horse keeps its placing at the event even though it had an unfair advantage?

The big question is, has anyone been disciplined for breach of the NRHA Medication Rules? Surely they did not write all those rules because the problem does not exist?

Keeping it positive, if there were no convictions and the testing is happening, then there are the costs associated. The NRHA funds the medications testing and the costs should appear on the annual financial report to all the members. Are any members aware of the cost of testing in the last fiscal year (2015) or have an indication of what the costs were in 2016?

Reading the NRHA Handbook is an education in the application of drugs in the equine sport today. With the listing of drugs available in the handbook, some may see this as an instructional guide more than a set of rules if they are not consistently testing.

Let us know your thoughts?

Don’t forget to go to the Poll on our website and vote.  Poll Now Closed.

NRHA Handbook turns back on horses again in 2017

Customs Can be the Biggest Horse Abuser
Scroll to top